SAINT JOHN’S, ANTIGUA & BARBUDA — The government is gearing up to engage temporary workers in the public service as it rolls out a mandatory vaccination policy within the civil service despite anti-vaccine sentiments within the country.

A government notice speaking to the hiring of temporary employees noted, “Having considered the new COVID-19 policy and measures for the management of the pandemic, Cabinet agreed that where persons employed by the government fail to comply with the Public Health Act Regulations to get vaccinated and are not permitted to return to work after the date of 1st October, 2021, temporary/substitute employment will be permitted on approval by Cabinet to ensure that critical services to the public continue to be provided.” 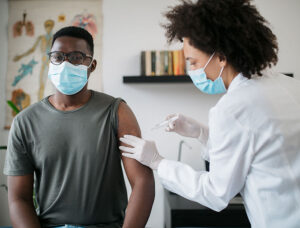 A man is vaccinated against the coronavirus. (Photo: American Hospital Association)

The new policy also mandates that those unvaccinated public sector workers are to remain at home without pay during the “period of noncompliance”.

Some quarters of society have pushed back against the mandate, prompting Prime Minister Gaston Browne to address the issue. Although he said the public seemed to be “responding positively” to the new requirements, he minced no words in doubling down on the policy with a fierce warning that anyone who does not comply will be replaced.

“My government has gone the extra mile to keep public servants employed,” Browne noted. “We have not put a single person on day-on, day-off.

‘We have not fired a single person, and now that we have decided to act as a responsible employer, to ensure that there is a safe work environment in the interest of all…some of them telling us that they’re going to withdraw their labour. 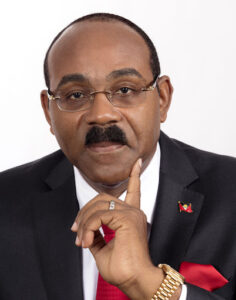 “Well, guess what. The Cabinet has already taken a position, ‘Well, fine. You withdraw your labour; we’re going to put somebody else in your position.’

“And sometimes — and this is not a threat — but sometimes temporary becomes permanent.”

In an impassioned defense of the vaccination mandate, the prime minister asserted that public sector workers still retain a choice in the matter but said the government “cannot justify paying” them if they are at home and not working.

“We are not threatening anyone’s employment,” Browne emphasized. “In fact, the government to date has not made a decision to terminate anyone. But if you choose to stay at home and not to do whatever is necessary in order to return to work, then that’s a choice that you would have made.”