BRIDGETOWN, BARBADOS — Barbadian roadside vendors, hailed by Minister of Energy, Small Business and Entrepreneurship Kerrie Symmonds as the “unsung heroes” of the nation, are poised to benefit from a new legislative framework and safe, sanitary facilities in which to operate.

The initiative, Symmonds said, is part of the government’s continuing effort toward resilient recovery in the face of economic challenges brought on by the coronavirus pandemic.

“Having recognized the significant contribution that vending, for example, has made to the development of Barbados, and the need for this country to decriminalize vending and give it the level of recognition it deserves, the government also introduced a new policy and legislative framework for vending,” he said. 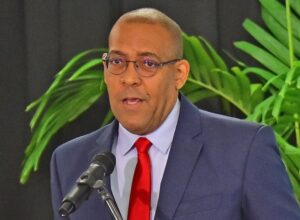 “The result of this will be to empower those unsung heroes of this land and to position them to play a more meaningful role in the national effort to build back Barbados better.”

Symmonds announced that his ministry, in tandem with numerous partners and stakeholders, “embarked on a project to provide a number of innovatively designed vending kiosks for the vendors of Swan Street and its environments”.

He said, “Additionally, my ministry will also facilitate the construction of a number of vending facilities in what will be now defined as specially designated vending zones in Barbados, equipped with running water, appropriate sanitary facilities for the first time ever and electricity, so as to allow those vending on the nation’s highways to do so in a safe and in an aesthetically pleasing and commercially viable environment.”

A new micro, small and medium-sized enterprises (MSME) registry and collateral registry are also in the works for Barbados, the minister said as he outlined how these tools could effect better decision-making and targeted assistance for the sector, in addition to empowering MSMES “in an entirely unprecedented way by allowing them to use equipment, tools and machinery, crops, livestock, vehicles and accounts receivable as collateral”.

Symmonds said, “I pledge government’s ongoing…commitment towards building Barbados back better and promoting its recovery through a more resilient small business sector that is globally competitive, regionally and nationally relevant,” highlighting that the government has already received over 8,000 applications from MSMEs under its financial assistance program.

He added, “It is imperative that government works with stakeholders to formulate strategic responses to the inherent risks and to the potentially adverse impacts of all the various challenges that confront this sector.”