Guyana VP encourages contractors to seize opportunities on the horizon

GEORGETOWN, GUYANA — Vice President Bharrat Jagdeo is urging contractors to be on the lookout for expanded opportunities on the horizon as the government plans future development in all 10 regions of Guyana.

He dropped the hint during a meeting with dozens of small contractors on Monday, during which he took the opportunity to “talk about the planning that is taking place in government, but more particularly, there are development plans for Georgetown, and how important it is that contractors be aware of the vision for the area in which they are providing services”. 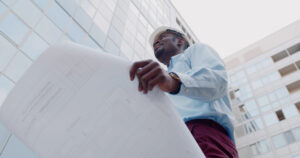 A contractor looks at plans.

He added, “These were mainly people who provide services in Georgetown but we hope that we can replicate that in other areas of the country and bring together the small contractors from those areas.”

In the meantime, Jagdeo advised contractors to seek out opportunities in other industries, especially in the oil sector, which is a major economic driver in Guyana. 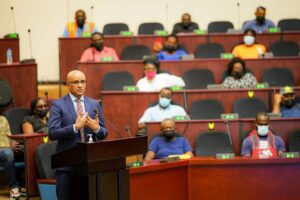 Earlier this year, Guyana Shore Base Inc. (GYSBI) Director Robin Muneshwer said the company was in “rapid expansion mode”, hinting at a robust future for the shore base provider for ExxonMobil — one of the largest oil and gas companies in the world.

Jagdeo noted that during his meeting with contractors, “I also spoke about evolving opportunities in other areas and how these small contractors can grow by mergers and partnerships to benefit from the other opportunities, particularly in the oil and gas sector that will present huge opportunities for people as soon as the local content legislation is passed.”

The highly anticipated Local Content Bill intends to maximize economic benefits for Guyanese people particularly but not exclusively within the oil industry.

A draft version of the bill reads, “Local content must be a means to promote economic development by creating opportunities for the Guyanese labour force and business sector in defined areas of work where the skills are available.

“Local content is an important strategic issue in the oil and gas industry. The government and other stakeholders are seeking to secure greater local benefits from oil and gas production.”

The bill is currently out for consultation.

Meanwhile, you can find the latest jobs in the Caribbean with Caribbean Employment Services Inc.