Out of 300 nurses interviewed, 50 were hired

NASSAU, BAHAMAS — The Bahamas recently hired some 50 Cuban nurses, becoming just one many countries worldwide to turn to recruit foreign healthcare workers amid a widespread coronavirus surge believed to be caused by the highly contagious omicron variant. 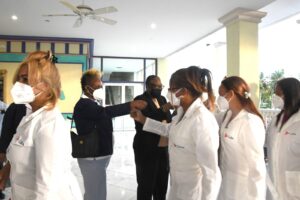 Members of the Bahamas Nursing Council greet 50 Cuban nurses who were recruited by the government and who arrived in The Bahamas on Friday, January 14, 2022. (Photo: BIS / Yontalay Bowe)

It is not the first time the island nation has brought on foreign healthcare workers during the pandemic, but comes at a time when its healthcare capacity is said to be challenged as more than 100 local healthcare workers were reportedly “out of the system” due to contracting the potentially deadly disease.

In a statement announcing the nurses’ arrival in country, the Ministry of Health and Wellness noted, “Their arrival comes on the heels of a cooperation agreement for emergency response to COVID-19, which was signed between both governments (Cuba and The Bahamas) to augment the Bahamian nursing staff on the frontline of the COVID fight.

“On January 7, 2022, Dr. Darville (minister of health and wellness), accompanied by a health delegation consisting of nursing administrators and human resource officers from Ministry of Health, Department of Public Health, Public Hospitals Authority and the Bahamas Nursing Council, arrived at the Unidad Central de Cooperacion Medica (Central Unit of Medical Collaboration) to conduct a vetting process to select Cuban nurses.

“Subsequently, an agreement was signed which called for, among other things, the nurses to speak the English Language.

The Bahamian government’s travel to Cuba to recruit healthcare workers came just days after fellow Caribbean nation Sint Maarten announced that it was “urgently” seeking to hire nurses amid a COVID surge. 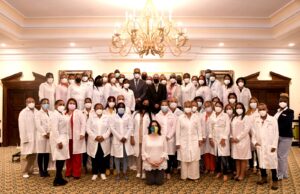 On Friday, January 14, 2022, the Commonwealth of the Bahamas officially welcomed 50 specialty nurses from the Republic of Cuba to aid in the continued fight against the COVID-19 virus. (Photo: BIS / Yontalay Bowe)

At the time, officials were even encouraging retired healthcare workers who might be available to consider rejoining the ranks as it, like many other Caribbean countries, battles another brutal wave of COVID-19 infections.

For The Bahamas, this is not the first time recruiting foreign workers has been necessary, and Cuba has been among the nations it previously looked to when sourcing help from abroad.

Commenting on this most recent addition, Minister of Health and Wellness Dr. Michael Darville said the government was “happy the nurses are part of the healthcare services”.

“It speaks to diplomatic ties between The Bahamas and Cuba,” he said, adding that the new nurses will be “treated like family” and are expected to treat patients with the same regard.