While he could not indicate exactly how many workers are set to benefit, Jagdeo said the pay rise will cost “upwards of $850 million”. 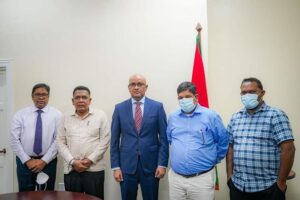 Vice President Bharrat Jagdeo meets with representatives of GuySuCo, the Guyana Agricultural and General Workers Union (GAWU) and the Ministry of Agriculture on Monday, December 20, 2021.

“We’ve decided that the seven percent increase will also be awarded to the sugar workers.”

“I explained at that time that under APNU (the former government), 7,000 sugar workers lost their jobs and in the five years, there was no wages or salary increase for sugar workers and apart from that, the annual production incentive had also been terminated.

“So, whilst the rest of the country got salary increases — public service and other areas — the sugar workers got zero, and in fact many of them lost their job.”

As he described the $250,000 grant as “almost reparative justice”, Jagdeo added, “We had to give a salary increase to the sugar workers this year and I promised, at that time, that whatever the public servants got, the sugar workers would also get.

“So, we’ve decided that the seven percent increase will also be awarded to the sugar workers.” 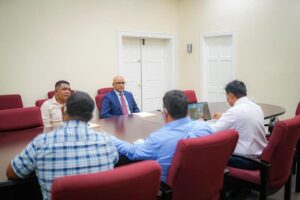 Vice President Bharrat Jagdeo meets with representatives of GuySuCo, the Guyana Agricultural and General Workers Union (GAWU) and the Ministry of Agriculture on Monday, December 20, 2021.

The Guyana Agricultural and General Workers Union (GAWU) expressly approved of the decision, saying in a statement that the seven percent wage hike will equate to “somewhat brighter” holidays for sugar workers who felt blighted by the former government.

“For the GAWU, the decision by the government to provide workers with a seven percent rise in pay, equivalent to their counterparts in other sectors of the state, marks a reversal of the policy of discrimination that was meted out to them during the Coalition government,” its statement read.

“It is without question that the pay rise approved by the government…will allow sugar workers to reclaim what they lost.”

The union added, “The GAWU, at this time, is appreciative of the government’s genuine efforts to bring about betterment to the sugar workers and the workers of Guyana.

“We are sure that the workers are greatly appreciative of the government’s decision. Indeed, it is yet another promise fulfilled by the government.”

Find the latest jobs in the Caribbean with Caribbean Employment Services Inc.