One aviation training institute already certified; another two in the pipeline

KINGSTON, JAMAICA — Noting that over 60,000 pilots are needed on a global scale, Minister of Transport and Mining Robert Montague said he would like to see more Jamaicans be trained locally to work in the airline industry, and especially as pilots.

According to Montague, around 3,000 Jamaicans are being trained as pilots in Florida, USA, but he wants more of them to complete their training at home instead. 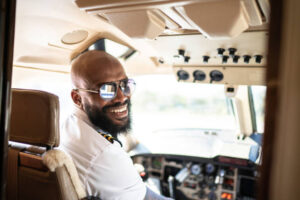 An airplane pilot in the cockpit of a private jet. (Photo: iStock)

“The aim is to get a lot of those Jamaicans home to be trained here,” the minister said, noting that not only is it “much cheaper to be trained in Jamaica”, but individuals can also get their start in aviation at a much younger age if they undertake training locally.

Montague asserted that more and more people have resorted to “doing their own flying” in the wake of the COVID-19 pandemic, stating, “Having a plane is not a luxury; it is now a necessity.”

As he revealed his ministry’s desire to see more Jamaicans owning airplanes, he added, “Jamaican pilots are known for their skills and technical ability.”

As such, Montague said he intends to approve additional landing strips to facilitate even more flights.

Minister of Transport and Mining Robert Montague on an airplane while on a tour of the Tinson Pen-based Aeronautical School of the West Indies (ASWI) in St. Andrew on Wednesday, December 29, 2021. (Photo: Michael Sloley)

It has already recently certified the Tinson Pen-based Aeronautical School of the West Indies (ASWI) in St. Andrew, with Montague noting that his ministry hopes the training offered at the institution will facilitate increased training in the aviation sector locally.

In an effort to further this cause even more, Montague said he had asked ASWI to “increase aviation knowledge across the island” and the organization has in turn “risen to the occasion” by designing a flight simulator that is being introduced in schools and rural areas.

Meanwhile, the minister also noted, the Airports Authority of Jamaica (AAJ) is set to begin offering scholarships targeting individuals who live close to aerodromes in an attempt to “further expand the aviation industry” locally.

But the government is not hands-off in the endeavor, as Montague declared, “We are investing in general aviation.”

To this end, he outlined that “hundreds of millions” of dollars are being invested by the government to “build pilot lounges at aerodromes, improved runways and other amenities at the facilities” and also being invested in “trained and employed air traffic controllers”.