“We are not going to tolerate abuse of workers in the workplace.” – Minister for Labour Kenneth Hodge

THE VALLEY, ANGUILLA — The Department of Labour has decided to conduct site visits at all major hotel properties after receiving complaints from some workers of alleged mistreatment while on the job.

Minister for Labour Kenneth Hodge made the announcement at a recent press conference, during which he and Premier Dr. Ellis Webster pledged the government’s commitment to looking out for Anguillian workers in all industries. 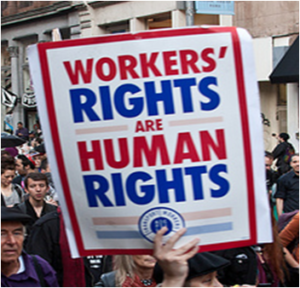 A group of protesters, with one of them holding up a sign that reads, "Workers' rights are human rights."

Hodge noted, “I just want to indicate as well that as minister, I’ve been getting complaints from workers about mistreatment, abuse and fair treatment of local staff at hotels.

“Just recently, the premier would have written a note to all the major properties outlining government’s concerns about these reports and at the Labour Department, we will be shortly undertaking some site visits to the various properties.”

He added, “We are not going to tolerate abuse of workers in the workplace. We are continuing to undertake reviews of the Labour Relations Act and other related policies to ensure that we give the labour legislation as much teeth as possible when these issues come up.”

Taking it a step further, Premier Ellis suggested it might be time to introduce trade unions for hospitality workers, noting that collective bargaining was being discussed as labour legislation remains in the works for this year.

The point was raised that workers may feel too intimidated by their employers to step forward during the site visits the Department of Labour has planned.

The Anguilla Department of Labour.

However, Hodge explained that the department will establish “safe spaces” where management will not be permitted and staff can discreetly speak up about their experiences.

“We’ll be meeting with senior staff — that is locals and expat workers — to have discussions with them about expectations of their performance, their conduct, the way they should be operating,” he said.

“We will be also asking for an opportunity while we are at the hotels to create a safe space we can have to engage with the lower-level workers so that they, too, can speak of their experiences if they are experiencing issues of abuse and so forth.”

Both Hodge and Ellis expressed confidence in the initiative, as they both recalled similar undertakings in 2021 and 2014, respectively, which yielded tangible results for hotel workers.

They also encouraged any employee who may be facing mistreatment to come into the Department of Labour’s office to have the matter “dealt with.”