According to the airliner, “As travel and tourism recovers globally, Arajet will bring approximately 4,000 new jobs and significant new economic development to the island nation.” 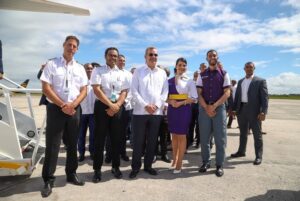 Officials from the Dominican Republic government and flag-carrier Arajet Airlines at the March 2022 launch of the airline that is expected to introduce some 4,000 new direct jobs.

Its positive benefit for not only tourism and the economy but also added convenience for the Dominican diaspora were highlighted by President Luis Abinader and Minister of Tourism David Collado during an official launch ceremony last week.

Abinader said, “Today is without a doubt a day to re-recognize the Dominican entrepreneurial spirit, the strength of our alliances and the success of a plan that we launched just 17 months ago with the aim of recovering tourism and employment in our country.”

He added, “Our commitment with the tourism sector has caused a greater commitment of local and foreign investors in multiple solutions, and all this ends in more and more jobs for our Dominicans, which is the purpose and the objective of our economic policies.”

The president pledged his government’s support to Arajet Airlines “as they seek to grow tourism into the country and enable Dominicans living abroad to visit their home with low-priced air fares”.

For his part, Arajet Founder Victor Pacheco said he is proud of his airline’s “significant role” in creating new jobs in the Dominican Republic and also contributing to the nation’s economic recovery. 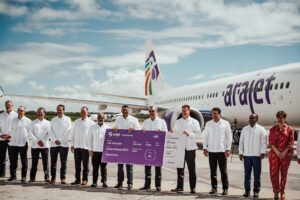 Officials from the Dominican Republic government and flag-carrier Arajet Airlines at the March 2022 launch of the airline that is expected to introduce some 4,000 new direct jobs.

“The Dominican Republican and the wider Caribbean region is underserved by low-cost airlines and passengers deserve a more affordable way to travel in our market,” he said.

“We believe Arajet is well-positioned to transform the Santo Domingo airport into a modern, new hub for destination and connecting traffic.”

Pacheco emphasized, “Arajet is also proud to play a significant role in job creation and GDP growth in the Dominican Republic, and we look forward to working closely with President Abinader and his administration to advance his pro-growth agenda.”

“We are clear that connectivity is the future of tourism in the Dominican Republic,” he said, highlighting the government’s aim to be “much more competitive” in this regard.