GEORGE TOWN, CAYMAN ISLANDS — Some 32 Caymanians have been hired as Customs and Border Control Service officers in what is being hailed as the largest recruitment exercise of the organization to date.

In a statement, the government confirmed, “The Cayman Islands Customs and Border Control Service has welcomed 32 new Caymanian officers into its ranks following a recent successful recruitment drive. 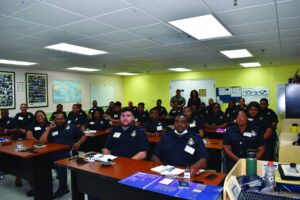 The 32 new recruits who will serve as Cayman Islands Customs and Border Control Service officers.

“Forming the largest recruitment class to date, the 32 Caymanian recruits bring varying professional backgrounds and areas of expertise, but all share a common enthusiasm for law enforcement.”

That “common enthusiasm” was lauded by Deputy Premier and Minister for Border Control Chris Saunders, who said he was “very pleased to see that there are many young Caymanians interested in a law enforcement career”.

“I am certain that with the strong guidance they will receive…they will be successful,” he said.

“I thank them all for their willingness and enthusiasm to serve and wish them well throughout their careers.”

The recruitment exercise is being lauded as the largest for the CBC to date.

According to Charles Clifford, CBC director, the new employees came out on top in a pool of more than 500 other qualified applicants.

“I am pleased with the level of community interest in CBC, as evidenced by the approximately 500 applications from Caymanians,” the director said.

“The recruitment exercise was very competitive and time-consuming, but was certainly worth the effort.

“I congratulate our 32 new recruits on their success and welcome them to our ranks.”

The government noted the recruits are “currently being rotated through various sections of the service as they undergo their initial on-the-job training”.

The new CBC recruits are receiving on-the-job training and will later undertake a four-month training course.

But this initial training will still be followed-up by a rigorous four-month course intended to mold the new recruits into model CBC officers.

“At the conclusion of their basic training,” the government noted, “the graduates will be deployed to different sections within CBC.”

CBC Director Clifford added, “They must remain ever mindful that, as CBC officers, we bear the heavy responsibility for collecting and protecting the government’s revenue and securing our borders.

“Through our collaborative work with our partner law enforcement agencies, we ensure the national security of our country and thereby allow our twin economic pillars of financial services and tourism to flourish.”