Some 18 major employers to attend Labour On The Blocks 2.0 in Grand Bahama

FREEPORT, THE BAHAMAS — Those looking for jobs in The Bahamas have a golden opportunity as the Department of Labour is set to host another job fair this Saturday. 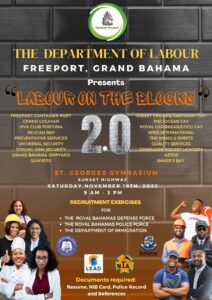 Jobseekers are asked to bring their resume, police record, references and National Insurance card to the job fair.

This follows a successful “Labour On The Blocks 2.0” held in the nation’s capital last month.

However, this latest edition will be held in Freeport, Grand Bahama, giving those from the country’s second city and other Family Islands a chance to browse the jobs available.

According to a government statement, “The Department of Labour’s Grand Bahama office, in conjunction with other government agencies, will host a Labour On The Blocks 2.0 Job Fair on Saturday, November 19, 2022, in Freeport, Grand Bahama.”

This is particularly timely as Grand Bahama has struggled economically for several years.

Residents have consistently complained of challenges with gainful employment. As such, a job fair would be tremendously beneficial if it sees the same amount of success as the Labour On The Blocks held in Nassau. 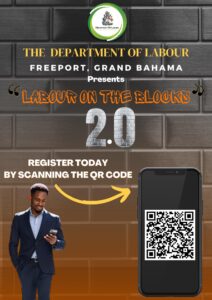 Jobseekers can register online to avoid long lines at the job fair.

Jobseekers in Freeport will have the chance to submit applications, be interviewed and possibly even be hired by one of some 20 major employers who will attend the job fair.

Several major cruise lines will be looking to hire positions for their respective private islands in the Bahamas.

Further, the Department of Labour advised that Disney Cruise Lines is holding interviews for lifeguards at Castaway Cay both before and after the latest edition of Labour On The Blocks 2.0.

The notable cruiseliner will hold interviews in the capital of Nassau, Bahamas, on Thursday, November 17.

It will then hold more interviews in Freeport, Bahamas, on Sunday, November 20.

Several major cruise liners have ramped up hiring and expanded projects throughout the Caribbean over the summer in anticipation of a cruise industry boom thanks to pent-up demand from the course of the COVID-19 pandemic.

Further, several major hoteliers will be hiring at the job fair on Saturday, giving jobseekers interested in tourism and hospitality an opportunity to get hired.

Representatives from Baker's Bay (Abaco), Pelican Bay and the Grand Lucayan will be on site to recruit.