Next job fair set for Grand Bahama before the end of Nov.

NASSAU, BAHAMAS — A job fair hosted by the Department of Labour over the weekend attracted thousands of jobseekers, many of whom were hoping to be hired on the spot.

For Director of Labour Robert Farquharson, the event in the capital was such a success that it will be repeated on other islands in the future. 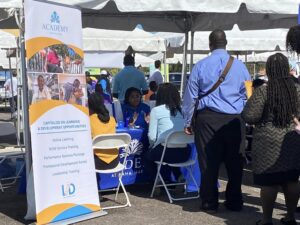 Dozens of jobseekers attend the Bahamian government's Labour On The Blocks 2.0 job fair.

“We're so pleased that we have hundreds and hundreds of jobseekers who came here,” he said.

“We have up to 46 employers on the ground. We have 4 training institutions.

“The idea really is for us to bring jobseekers together with those employers who are looking to hire.”

Farquharson added, “We're so pleased with the turnout and we look forward to doing more of these job fairs in the very near future.

“Grand Bahama, get ready; the department of labour is on the way.”

The director also encouraged anyone who did not end up being hired at the fair to consider signing up for training opportunities instead. 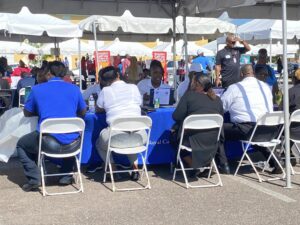 Dozens of jobseekers attend the Bahamian government's Labour On The Blocks 2.0 job fair.

“If you do not get a job today, we are going to give you an opportunity to get some training to better prepare you for the labour market,” Farquharson said.

Additionally, he encouraged senior high schoolers to take advantage of a training programme that would allow them to receive formal certification for technical jobs even before they graduate.

“We have a special career opportunity today for high school students,” the director revealed.

“Those in grade 10 and grade 11 can be enrolled in the BTVI (Bahamas Technical and Vocational Institute) Dual Enrollment Programme, where you can, while attending high school, be certified to become a plumber, an electrician, a mason or a welder.

“The idea is by the time you graduate from high school, you would have certification and you'll be better prepared to enter the job market.” 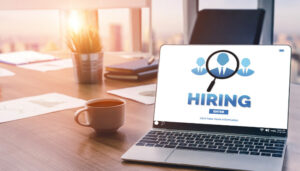 Jobseekers can skip the lines and find the latest jobs online at Caribbean Employment Services Inc.

However, despite the huge turnout, some Bahamian jobseekers were frustrated with long lines at the fair.

Many took to social media, sharing photos of lines that stretched for blocks as hundreds waited to enter the fair site.

Some discouraged jobseekers even left as a result.

But those seeking jobs in Nassau have alternative options by using online job boards and resource sites like Caribbean Employment Services Inc. or the Department of Labour’s own Online Skills Bank.