NASSAU, BAHAMAS — Jobseekers in The Bahamas are being put on notice to get their resumes and interviewing skills ready as Gilgan Co. prepares to host a job fair next week.

Gilgan is the company behind restaurant brands so widely successful and popular that they’ve become household names, especially in the nation’s capital. 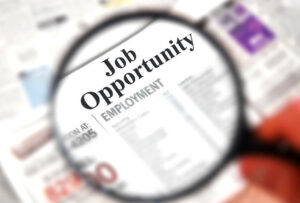 Gilgan Co. has continued providing the Bahamian people with much-needed jobs over the years.

The organization is the parent company of the iconic Bamboo Shack and its newer rendition, Bamboo Grillhouse, which are fan favorites when it comes to local restaurants in The Bahamas.

Gilgan was launched in 1990 with the opening of the first Bamboo Shack restaurant. It has since expanded to several more locations, including in the United States.

Over the years, Gilgan has employed hundreds of employees at Bamboo Shack alone, and that number has only increased alongside the company’s growth.

Now, it’s looking to once again provide dozens of jobs to the Bahamian populace, providing crucial employment in a particularly economically challenging period. 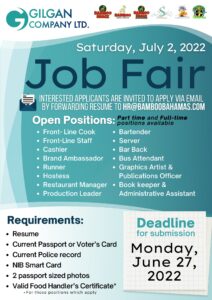 Gilgan Co. is asking jobseekers interested in applying for restaurant positions to send in their resumes.

Jobseekers have until this Monday, June 27, to submit their applications for job openings among Gilgan’s extensive line of restaurants and branches.

The positions up for grabs encompass all areas of restaurant operations, including front-of-house and corporate, in both part-time and full-time capacities.

“We are looking for excited, highly motivated, professional individuals with integrity and character to join our team,” said a Gilgan representative.

Gilgan is asking those interested in applying for the available jobs to submit their resume to hr@bamboobahamas.com no later than Monday for pre-screening ahead of its actual job fair to be held at a later date.

A flyer from the organization noted that the job fair is expected to be held on Saturday, July 2, but details regarding the exact location and time have yet to be disclosed.

However, applicants will be expected to provide a copy of their passport or voter’s card, their NIB Smart Card, two passport-sized photos, a police record and a valid Food Handler Certificate if applicable.