NASSAU, BAHAMAS — Bahamian jobseekers have their first major opportunity to put their best foot forward and get hired on the spot as the Department of Labour will hold its first job fair of 2023 this coming Saturday. 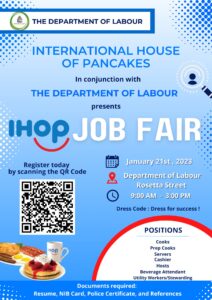 Hundreds of jobs are up for grabs with the new IHOP Bahamas franchise.

The job fair will be primarily for hundreds of open positions at two new IHOP restaurants that will open in the nation’s capital in the weeks and months ahead.

According to IHOP Bahamas Executive Burton Rodgers, the franchise will need to hire a significant amount of manpower as both restaurant locations are expected to be open 24/7 once they are fully operational.

“The hiring of 200 persons is not an easy task, and that 200 will hopefully increase to about 600 within the next six months,” Rodgers said.

Speaking to the tremendous opportunity available for jobseekers, Bahamian Minister of Labour Keith Bell commented, “The Ministry of Labour is extremely pleased to partner with IHOP Bahamas to find suitably qualified Bahamians to fill employment opportunities and to contribute to the growth and development of the local economy.”

Hundreds of jobs in Nassau up for grabs

The Department of Labour’s first job fair of the year will be held on Saturday, January 21, 2023.

From 9 a.m. to 3 p.m., interested jobseekers can visit the Department’s headquarters on Rosetta Street to submit job applications and undergo interviews on the spot. 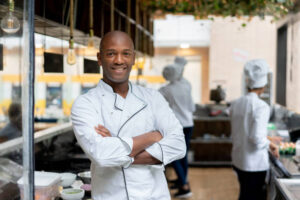 IHOP Bahamas is hiring for dozens of positions, including managerial.

He added, “Persons attending the job fair are asked…to bring the necessary documents — resumes, certificates, NIB Smart Card or government-issued identification — as first and second interviews will be conducted during the job fair on Saturday.”

Officials also stressed that candidates should arrive “properly dressed and groomed”, noting that anyone who needs assistance with proper attire can contact the Department of Labour for support in that regard.

Further, given a severe issue with long lines that plagued one of the last job fairs held in 2022, the Department of Labour has introduced a pre-registration process this time around.

Candidates who plan to attend the job fair can scan a QR code found on the job fair’s virtual flyer, or click this link to pre-register and avoid waiting in line at the actual event.