BRIDGETOWN, BARBADOS — As the Caribbean continues its slow but steady economic recovery following the devastating blow of the COVID-19 pandemic, with citizens returning to their jobs and employment projected to increase, the International Labour Organization’s (ILO) incoming director-general has pledged to get to work “solving real-life problems of the working people”.

Gilbert F. Houngbo made the comments in his first address since being elected the ILO’s new director-general last week, with his term set to begin this October. 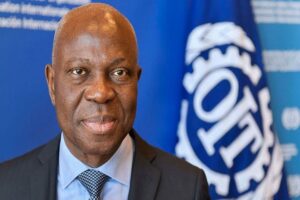 The Togo, Africa, native said he felt humbled to have been elected not only as the first director-general from Africa in the ILO’s century-long history, but also as someone from modest beginnings.

“Although my origins are African, my perspective is global,” Houngbo noted.

“In an age, unfortunately, of dividedness, my commitment to be a unifying director-general stands firm.”

As he recalled himself growing up as a young boy persistently pursuing social justice, Houngbo asserted “decent work and social justice represent the only path to truly sustainable development and peace”.

His pledge rings promising for a still-recovering Caribbean, where many nations are actively pursuing sustainable development for the future and where the prevalence of the informal sector remains a concern.

The newly elected director-general’s comments come just weeks after CARICOM Secretary-General Dr. Carla Barnett revealed many women in Latin America and the Caribbean remain disenfranchised to a notable extent when it comes to the workforce.

As he pledged to represent the many voices of “those who rely on us in the ILO” around the globe, Houngbo said, “I’m thinking about the four billion people around the world who do not have access to social protection.

“I’m thinking about the 200-plus million of women and men who face unemployment; the 160 million children in child labour; the 1.6 billion of people in the informal sector; the enterprises — particularly the small and medium-sized enterprises that are facing drops in demand, supply chain disruption [and] foreclosure, due to crisis including the pandemic, including climate change and armed conflict.

“I’m thinking about the women and men who face discrimination, violence and harassment on the workplace and elsewhere.”

Houngbo maintained these examples are “all expressions of unacceptable social injustice” the ILO is “morally, if not legally, bound to address”.

As such, he emphatically said, “Indeed, the world needs an ILO that is capable of solving real-life problems of the working people and the enterprises.”