SAINT GEORGE’S, GRENADA — The newly elected government has put the public on notice that it’s about to undertake a massive hiring spree in the public service.

This was recently revealed by Prime Minister Dickon Mitchell and Minister for Legal Affairs, Labour and Consumer Affairs Claudette Joseph.

The officials acknowledged that an assessment of the public service found it has been understaffed for far too long. In some cases, according to Minister Joseph, some high-ranking government positions went unfilled for as long as 10 years. The public sector has been understaffed for years, officials say.

That issue, she pledged, will be corrected now by the government that just came into power in June of this year.

“One of the first things we are going to do in delivering on that promise is to start fixing our public service and staffing all of the departments of government adequately so that we can deliver quality service to all of the people of Grenada.”

Hiring will not wait for pension reform

Prime Minister Mitchell likewise said the “right-sizing” of the public sector will improve its level of service.

He added that his government will not wait for a planned pension reform to start before the hiring and restructuring begin.

“There are positions which are in the public service which must be filled if some of these ministries are to actually function,” said PM Mitchell. 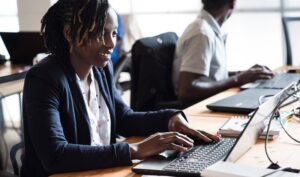 The government will not wait for pension reform to start hiring.

“So, we are not waiting on pension reform to fill the positions that are in the Ministry of Agriculture.

“We are not waiting on pension reform to fill the positions in the Ministry of Labour.”

As an example, the new prime minister noted “there was no deputy permanent secretary in the Ministry of Finance” when his government came into power.

However, he underscored, he has already filled that position, “recognizing the kind of workload that is taking place in the Ministry of Finance”.

Mitchell continued, “So, we recognize [that] to actually make some parts of the government even function, there are positions that are going to have to be filled.

“We recognize that some of these positions that have been frozen for a very long time are going to have to be unfrozen, and we cannot wait for the pension reform.”