GEORGETOWN, GUYANA — Scores of sugar workers who will be impacted by Guysons K+B Industries’ (GKB) acquisition of the Enmore Packaging Facility will be absorbed into the company as part of the transition, according to Minister of Agriculture Zulfikar Mustapha.

With Enmore Packaging Facility set to relocate its operations, many of employees have expressed concern about the fate of their jobs.

However, the government of Guyana has said it entered into an agreement with GKB, an oil company, whereby GKB will lease the facility; transform it into “a modern oil field service center and manufacturing facility”; as well as “retain every worker employed at the facility and provide the necessary skills training”. 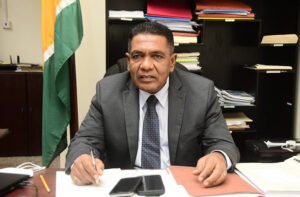 As he addressed a crowd of impacted workers, Mustapha said, “As fate would have it, we are now looking to divest and we’ve met with an interested investor and signed an agreement that will see GKB leasing this packaging plant and transforming it into a modern machine shop.

“I want to make it clear that the workers who are employed will be absorbed by the company. So, you can rest assured that your jobs will be secured.

“From the government level, we’ll also make two months’ pay available to you to assist with the transition.” 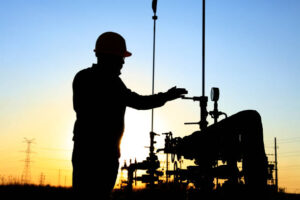 The silhouette of a worker in an oil field.

As the former sugar workers transition into the oil sector alongside the facility’s transformation, Mustapha said another 460 new jobs will become open for Guyanese in the neighboring communities.

Minister of Health Dr. Frank Anthony, who also addressed impacted workers, likewise pointed out the potential job opportunities that will be created with the expansion of the oil industry.

“You will see us developing, as a government, a number of facilities in the East Coast,” he said.

“We want to create jobs for these people in these industries.

“We have large finds of oil offshore and, therefore, they would need certain machinery and parts for that industry.

“We have in this community, and in the surrounding communities, a lot of persons who have the skill set, and I’m sure they will be looking for persons with those kinds of skills as they get this particular production up and running.

“In addition to that, there are other interests, so it’s government’s intention to ensure that we develop this area and other surrounding villages so that more people can be employed.”